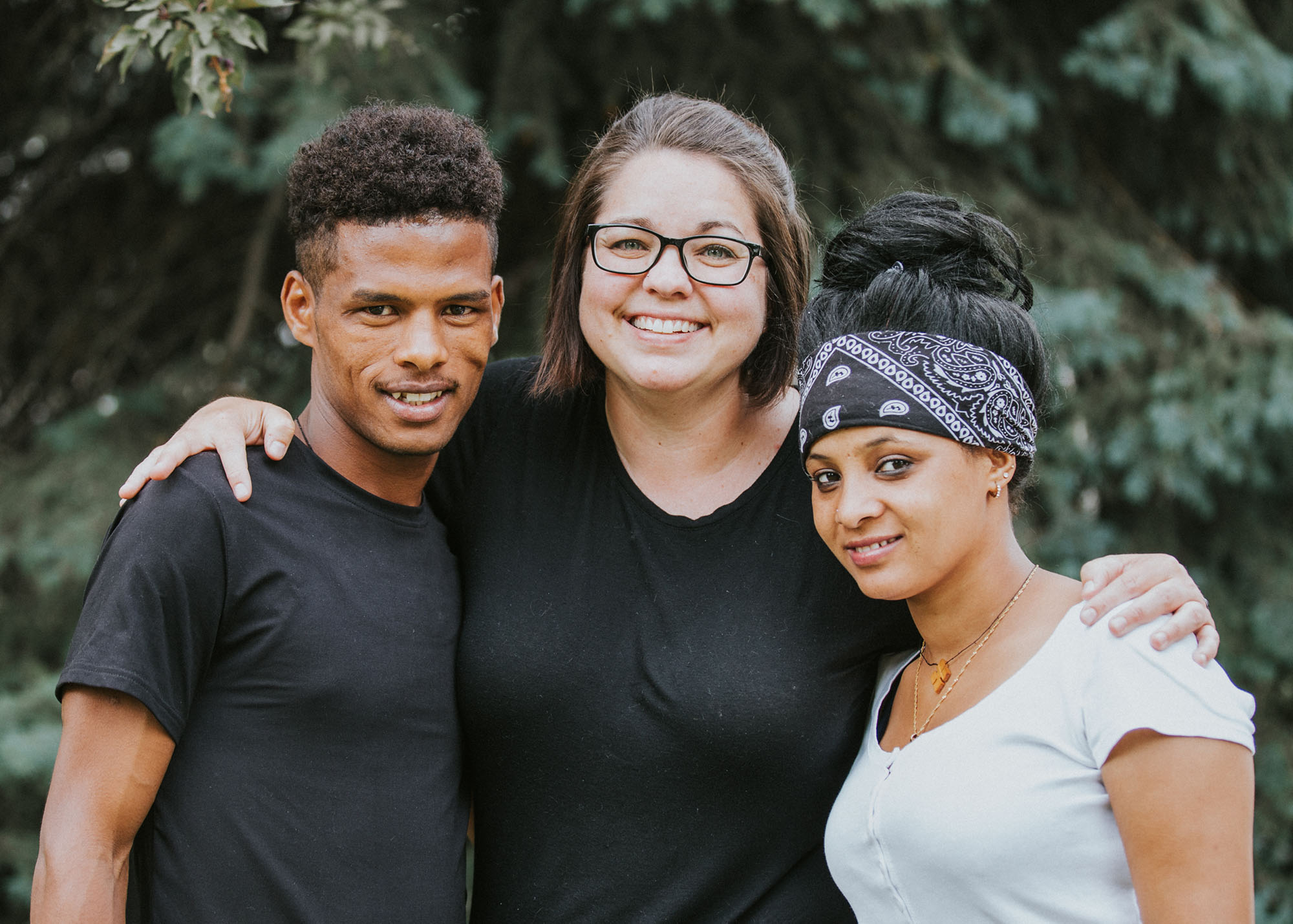 “Welcoming calls for expanding legal pathways for entry and a stop to pushing migrants and displaced people towards countries where they face persecution and violence. It also demands balancing our concerns about national security with concerns for fundamental human rights.”

110 ICMC protection experts deployed to 31 countries submitted 54,698 cases of vulnerable refugees to be considered for resettlement to third countries.

Working towards durable solutions for refugees, ICMC continued to serve as a key partner in facilitating resettlement through the U.S. Refugee Admissions Program in Turkey and Lebanon.

ICMC staff in Turkey and Lebanon interviewed 3,204 refugees being considered for resettlement and provided case management assistance to over 20,000 refugees awaiting resettlement in the U.S.

At the request of the Netherlands government, ICMC invited representatives of European Member States to observe its cultural orientation training at ICMC’s facility in Istanbul.

In close cooperation with the Jesuit Refugee Service Croatia, ICMC has assisted the Croatian Government with its efforts to resettle Syrian refugees presently living in Turkey.

Offering Vulnerable People a New Opportunity to Rebuild Their Lives

The Story of Tedros and Yorusalem

A story of courage, resilience and new beginnings — this is how Natalie describes the journey of her two teenage foster children, Tedros and Yorusalem.

Originally from Eritrea, the boy and girl belong to a group of unaccompanied minors who have been resettled in the United States after being evacuated from Libya to Niger.

“Learning the language is challenging and communication can be difficult sometimes, but everything else is easy,” says Tedros, a young Eritrean boy with a ready smile.

After arriving at their new home in Salt Lake City, Tedros and his cousin Yorusalem didn’t waste any time in starting to settle in. Their foster mother, Natalie, a social worker who assists war veterans, helps the teens navigate their new neighborhood and connect with other families.

Young people in Eritrea have few options: remain and be conscripted into indefinite military service — which often equals inhumane conditions — or flee. About one fifth of the population has done just that.

The two cousins got out in July 2016. They traveled through Sudan to Libya, where refugees and migrants are routinely imprisoned, beaten and tortured. There the UN Refugee Agency identified the cousins – unaccompanied minors – as particularly vulnerable and eventually evacuated them to Niger.

In Niger’s capital city Niamey, they underwent a long and strict interview and vetting procedure before being resettled to the U.S. ICMC was involved with this process through its child protection, refugee status determination and resettlement experts who work at the UN center in Niamey.

“I am not sure yet about what I want to do, but I am set on continuing my education,” says Yorusalem, who is also looking for an after-school job. Tedros’s goal is to become a pharmacist.

Tedros and Yorusalem belong to a larger group of minors who were resettled in the U.S. in 2018, thanks to the work of the U.S. Conference of Catholic Bishops in coordination with the U.S. Department of State and the Department of Health and Human Services. In Salt Lake City, Catholic Community Services is assisting them.

Expertise That Makes a Difference

Tedros’ and Yorusalem’s story is one of the many uplifting tales to which ICMC experts contribute every day.

Through its Deployment Scheme, ICMC facilitated the protection and resettlement process of thousands of refugees identified as vulnerable by the UN Refugee Agency around the world. In Turkey and Lebanon, ICMC’s Resettlement Support Center helped governments identify and screen vulnerable refugees for whom resettlement is the only solution.

After being evacuated from Libya, Tedros and Yorusalem were brought to Niger, where their resettlement process to the United States started. ICMC deployed 11 experts in Niamey, Niger’s capital city, to support the UN Refugee Agency operation there.

They submitted nearly 54,700 cases of vulnerable refugees for consideration for resettlement to third countries. They also worked on child protection, refugee status determination, prevention of sexual and gender-based violence, and anti-fraud measures.

ICMC’s Resettlement Support Center for Turkey and the Middle East draws on over 65 years’ experience assisting governments and international agencies to resettle refugees. The Center provides a range of customized services, including counseling, cultural orientation, and medical exams.

In 2018, ICMC continued to serve as a key partner to the U.S. Refugee Admissions Program in Turkey and Lebanon, assisting in case management for over 20,000 refugees awaiting resettlement. ICMC staff interviewed more than 3,200 refugees being considered for resettlement.

A new partnership was established with the Dutch Government to host cultural orientation sessions at the Center’s Istanbul facility, which was also visited by other European government delegations interested in its services.

Resettlement to a third country and other complementary, safe, and legal admission pathways are key instruments to welcome and protect vulnerable refugees and migrants. They provide life-saving and durable solutions for refugees but depend on States’ goodwill and policies. In 2018, while nearly 1.2 million people needed resettlement, according to government statistics only 92,400 benefited from this solution. Thus, advocacy for such solutions are even more urgent than ever before.

During the 2018 negotiations related to the Global Compact for Migration and the Global Compact on Refugees, ICMC consistently requested more resettlement places and other complementary admission pathways such as humanitarian visas, private or community-based sponsorship programs, higher education scholarships, family reunification policies, and flexible work arrangements.

In May, together with other civil society organizations, ICMC highlighted the need to provide safe and legal pathways to access protection for refugees and migrants. Such measures will be required if the Global Compacts are to achieve their goals of delivering safe, orderly, and regular migration as well as a comprehensive protection framework for refugees.

In June, ICMC child protection expert Natalie Achten brought to the attention of government officials gathered in Geneva the need not only to increase the number of resettlement places but also to speed up the process. This is necessary so that children and teenagers do not remain “in limbo for a long time,” said Achten, who works with unaccompanied minors evacuated from Libya to Niger.

In November, ICMC Europe and 15 NGOs urged the European Union to provide more legal and safe admission pathways for refugees seeking protection. Since there are not enough available entry alternatives, a growing number of people are risking their lives in desperate journeys. However, civil society initiatives show the potential of complementary pathways to respond to protection needs.

In collaboration with the UN Refugees and Migration agencies (UNHCR / IOM), ICMC Europe published the third in a series of three papers on innovative models for the protection of refugees. They address topics such as private or community-based sponsorship programs, higher education scholarships, and humanitarian admission programs.

ICMC, UNHCR, and IOM presented the outcome of a joint research program on innovative models for the protection of refugees.

Following the first draft of the Global Compact for Refugees, a group of U.S.-based Catholic organizations and ICMC urged States to increase their commitments to resettlement and other safe and legal admission pathways.

Expanding safe and legal admission pathways is the critical underlying issue in the protection of migrants and refugees ― an argument put forward by a group of NGOs during the negotiations on the Global Compact on Migration.

ICMC child protection expert Natalie Achten urged governments to make more resettlement places available and to speed up the resettlement process at the Annual Tripartite Consultations on Resettlement in Geneva.

The need to provide solutions for migrants and their families, such as family reunification visas, was emphasized by ICMC and the Geneva-based Forum of Catholic-Inspired NGOs at a side event during the UN Human Rights Council.

ICMC Europe and 15 NGOs called on the EU to urgently provide more legal and safe pathways to access protection, as a way to curb the numbers of refugees and migrants forced into deadly journeys.

In congratulating governments who adopted the Global Compact for Migration, ICMC and over 90 NGOs urged them to focus on implementing its commitments, especially an increase in safe and legal pathways for migration.

Welcoming the Needy in Mexico

ICMC continued supporting the work of Missionary Sisters of St. Charles Borromeo – Scalabrinians with migrant women and children in Mexico.

In Tapachula, near the border with Guatemala, these Sisters welcome migrant children and teenagers working under exploitative conditions in the municipal dump. They provide lodging, food assistance, health care services, and psychotherapy sessions to the children and teens. They also provide evacuation from Tapachula for teens identified as particularly vulnerable to repeated gang violence.

Most of the children and teens accompany their parents, who had to flee violence in Honduras, El Salvador or Guatemala. The Sisters hold monthly workshops with parents, providing them with tools and resources to achieve an upbringing free from violence.

At the Centro Madre Asunta shelter in Tijuana, the Sisters welcome migrant women and children who attempt to seek asylum in the United States or who have recently been deported.

The shelter responds to the basic needs of the migrants, including food and clothing. It also responds to the social, economic, personal, and spiritual needs of its residents. These activities range from psychotherapy and self-esteem sessions to sports and art activities and rights-awareness workshops.

The Sisters also help reunite family members who have been separated and deported from the United States.

In both locations, legal assistance provided by the Sisters allows beneficiaries to regularize their immigration status in Mexico through humanitarian protection. This status makes it possible for them to access needed services in the country.