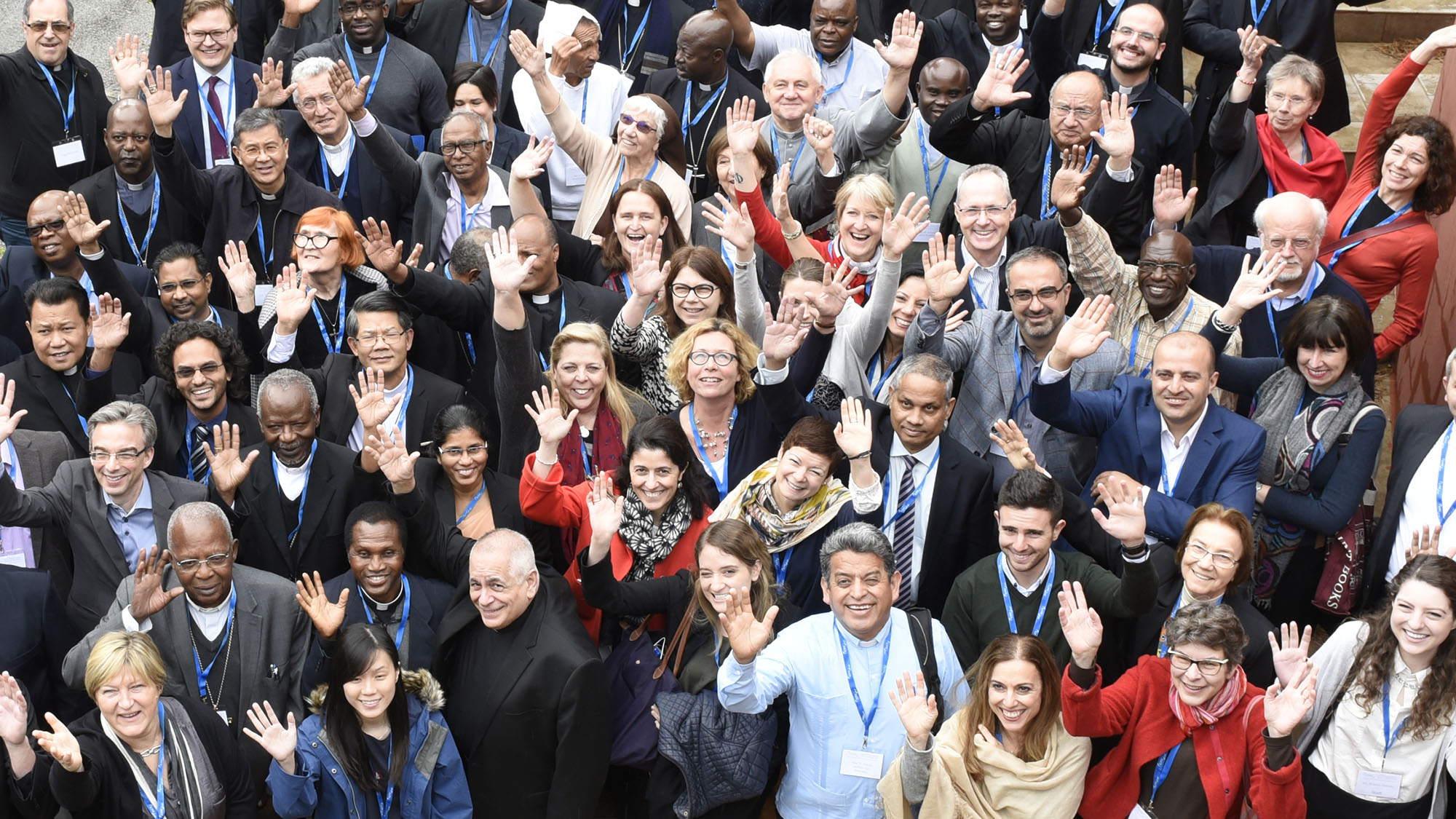 The Council of the International Catholic Migration Commission – ICMC’s highest governing body – met in Rome from 6-8 March 2018. It received a report of the organization’s activities during the past four-year mandate, appointed a new Governing Committee, elected a new President, affirmed the appointment of the Secretary General and adopted a Strategic Framework for 2019-2022.

The meeting also reviewed the development and implementation of the two UN Global Compacts for Migration and on Refugees, discussed present-day migration trends, challenges and best practices and considered the experiences of ICMC national members, other Catholic-inspired organizations and the United Nations in this field.

Show God’s Love to Our Migrant Brothers and Sisters

“The cause of this organization is the cause of Christ himself,” affirmed His Holiness Pope Francis in his address to the Council of the International Catholic Migration Commission, meeting in Rome from 6-8 March 2018.

“Today as in the past, liberating the poor, the oppressed and the persecuted is an integral part of the mission entrusted by God to the Church,” Pope Francis stated.

The Holy Father expressed the hope that “this work will continue to inspire local churches to do all they can for persons forced to leave their home countries and who, all too often, become victims of dishonesty, violence and abuse of every sort.”

His Eminence John Cardinal Njue thanked Pope Francis on behalf of Council members “for the clear teaching you have shared with us […] to welcome, protect, promote and integrate migrants and refugees in all parts of the world.”

For Pope Francis, the negotiations towards global agreements on refugees and on migration taking place at the time in the international community were “a privileged forum” to implement an “open and sincere dialogue with government leaders.”

Such dialogue is essential, Pope Francis said. “Together we must encourage countries to coordinate more suitable and effective responses to the challenges posed by issues of migration.”

“I ask the Holy Spirit to continue enlightening all of you as you carry out your vital mission showing forth God’s merciful love to our migrant brothers and sisters,” Pope Francis concluded. 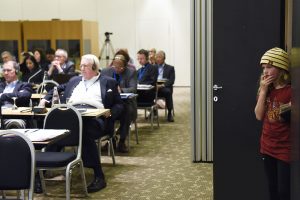 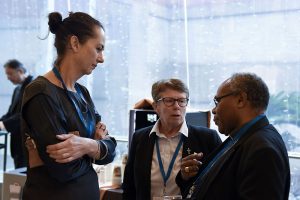 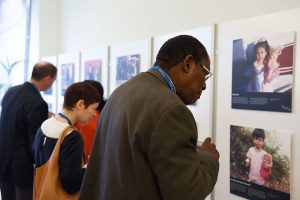 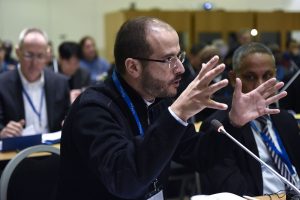 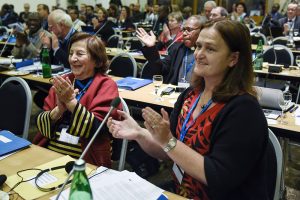 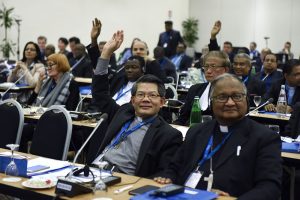 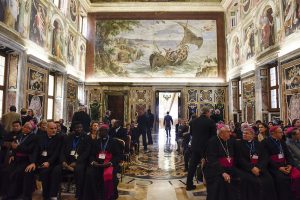 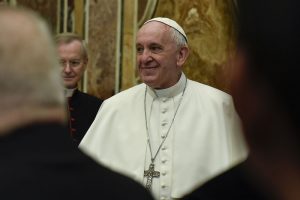 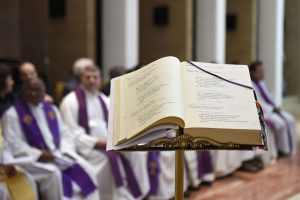 Towards a Culture of Encounter Amid Growing International Challenges

Responding to the Globalization of Indifference

A call to renewal and openness to new challenges was urged by Vatican Secretary of State Cardinal Pietro Parolin during opening remarks to the ICMC Council meeting. His words were followed by a keynote address by Associate Professor of Theology and Religion Dr. Anna Rowlands. Secretary General Msgr. Robert J. Vitillo also took the floor to report on the state of the ICMC.

The need to keep migrant families united, offer greater support for those left behind and create a more welcoming reception of migrants worldwide were emphasized by Cardinal Parolin.

By “providing information and raising awareness,” ICMC “can help […] dispel many unfounded prejudices and fears regarding the reception of foreigners” and promote a “balanced and positive perception of migration,” he said. ICMC also contributes by “creating alternative and safe paths of migration,” the Cardinal stated.

For Dr. Rowlands, the Catholic response to migration must foster a “culture of encounter.” Catholic organizations can play a critical role in articulating “the common good” in public policy and debate, she said.

Dr. Rowlands emphasized the need for all – individuals, civil society, and nation-states – to overcome the “globalization of indifference” and reclaim responsibility for others, particularly those who are suffering.

Since the Council’s previous meeting in 2014, and in response to the growing challenges and scale of forcible displacement, ICMC expanded its activities across the globe. At the beginning of 2018, the number of beneficiaries supported on an annual basis had grown to an estimated half a million people across the globe, with some 700 staff in over 40 countries.

Msgr. Vitillo described a wide range of ICMC efforts in protection and prevention, humanitarian assistance, advocacy, refugee resettlement, migration and development around the world; he further held up ICMC’s worldwide network of church engagement in migration and refugee issues at local and national levels.

Council members paid tribute to former ICMC President Peter Sutherland, who had died in Dublin in January 2018 following an illness. Mr. Sutherland was an internationally recognized leader in the fields of business, trade, migration, and integration.

Governance of Migration and Refugees: The Role of States and Civil Society

The state of migration and refugees and the related Global Compacts were the focus of two panel discussions at the Council meeting.

Participating in the panel on the state of migration and refugees were Ms. Carol Bachelor, Director of the Division of International Protection of the UN Refugee Agency (UNCHR), Ms. Michele Klein Solomon, Director of the Global Compact for Migration at the UN Migration Agency (IOM), and Mr. Walter Brill, Director of Operations at ICMC.

On the Compact on Refugees, Ms. Bachelor stressed that “we are at a phase where implementation and operationalization is the critical thing. Because many states hosting huge numbers of refugees are increasingly asking: ‘Where is the solidarity?’”

For Ms. Klein Solomon, “the rise of populism and the demonization of migrants and refugees is the greatest challenge.”

Mr. Walter Brill, Director of Operations at ICMC, reminded the meeting that ICMC was founded at a time “when the term ‘mixed migration’ did not exist. We dealt from the beginning with mixed migration. This is a reality nowadays!”

In a second panel discussion on the Global Compacts, Fr. Michael Czerny, Co-Secretary of the Vatican Section for Refugees and Migrants, noted that “we understand advocacy as ensuring that the best resources are available in the public area as well.” Which means saying to governments: “This is what we have experienced, this is what we do, these are the results we get. We think that you will find these useful too.”

“We understand advocacy as making the best resources of the Church also available in the public area. To say to a government: This is what we have experienced, this is what we do, these are the results we get – we think that you will find this useful also.”

Co-secretary with Fr. Czerny, Fr. Fabio Baggio expressed belief that, when it comes to the implementation of international legal frameworks like the Global Compacts, the Catholic Church with other civil society groups are “main actors and [should be] provided with the resources” to continue fulfilling their task.

Mr. Stéphane Jaquemet, ICMC Head of Policy, called on Council members to lobby with their governments “to ensure that some of the principles which are under attack remain” untouched in the final version of the agreements.

Faithful to Its Mission, Ready for the Future

The newly-elected President, an Australian-born lawyer, practitioner and scholar whose experience spans more than 25 years, addressed the Council meeting by telephone.

Dr. Gallagher suggested that ICMC’s work and mandate are central to a “new political and social reality” marked by “great stress and uncertainty.” Amid loss of faith in multilateral cooperation and institutions and wavering commitment to fundamental principles of human rights and justice, “migration has become […] the lens through which governments and communities are interpreting and responding to the world,” she said.

For Gallagher, Pope Francis’ engagement on migration represents an “unprecedented opportunity” for the Catholic Church and the ICMC “to speak its truth loudly, clearly and consistently,” providing “urgently needed global leadership” in line with the Holy Father’s moral and spiritual guidance. Because “We have truth and humanity, love and compassion on our side, […] failure is not an option,” she insisted.

A U.S. national and trained social worker with broad expertise in migration and refugee services, child protection, social services, human rights, HIV/AIDS, and global health, Msgr. Vitillo was appointed Secretary General in 2016. He previously served as Head of Delegation of Caritas Internationalis in Geneva and as its Special Adviser on HIV and AIDS.

The members of the newly appointed Governing Committee are:

The new Strategic Framework, approved by the Council Plenary Meeting, highlights the following organization’s priorities and objectives for the next four years.

The Framework recognizes Catholic Social Teaching as the foundation of ICMC’s actions, which also are more recently inspired by Pope Francis’ invitation to welcome, protect, promote and integrate migrants and refugees.

ICMC’s mission is to protect and serve uprooted people regardless of faith, race, ethnicity or nationality. Confronted with the ever-growing phenomenon of forced displacement, the 2019-2022 Strategic Framework seeks to guide the Commission’s efforts to carry out its mission today, and tomorrow.

In a panel discussion on Facing New Challenges, Fortified in a Spirit of Solidarity, Council members heard testimonies on the experiences in and responses of the Church to the situation of migrants and refugees around the world.

Bishop Vincent Long of Paramatta, Australia left his homeland in the mass exodus after the end of the Vietnam war in 1975. Sharing his testimony in the Council’s final panel discussion, Bishop Long recalled his experiences as a boat person and refugee in Australia.

Successfully integrated within Church and society, his message is that “vulnerable people wanting a better life and future for themselves and their children shouldn’t be seen simply as a burden or a liability. Even the most traumatized and impoverished can become great contributors and builders of Church and society.”

A second testimony was offered by Bishop Gervas Rozario, President of Caritas Bangladesh and ICMC Focal Person there. His account of the situation of the over-one million Rohingya refugees in his country made it clear that “this is a very complex problem … for which it is difficult to see any solution at the present.”

He reported on the involvement of the Church and Caritas “from the beginning in order to help them in any way possible.” And recalled that a few months earlier, Pope Francis had “asked the international community to help mitigate this humanitarian disaster.”

By January 2018, Uganda was hosting some 1.4 million refugees, mostly from Southern Sudan. In his testimony, Msgr. Francis Ndamira, Executive Director of Caritas Uganda and ICMC focal person there noted strong government commitment and the empowering programs carried out by the Church of Uganda.

In Uganda, he said, refugees live in settlements rather than camps. Each family is allotted land and encouraged to grow food for their own livelihoods. “We have learned that refugees are not passive bystanders in search of solutions to their predicament. They are part of the solution.”

For Ms. Julianne Hickey, Director of Caritas New Zealand and ICMC Focal Person in her country, “We all have a migration story”. With 100 different ethnic groups, the country has been «shaped by migration,” but its refugee quota had been very modest” for more than two decades.

In 2016, the Catholic and Anglican churches urged the government to increase its refugee intake and offered support to welcome refugee families. Catholic dioceses appointed a person to coordinate action at the parish level while Caritas created resources for schools and parishes on the theme of migration.

Sr. Gabriella Bottani is the coordinator of the anti-trafficking organization Talitha Kum. She testified that trafficking” is a grave violation of human rights,” but also a huge business, “which is why eradicating it is such a cumbersome and difficult task.” Talitha Kum comprises 22 anti-trafficking networks in 76 countries, involving Catholic religious sisters and laypersons.

Women constitute approximately 70% of the survivors, of which about 20% are under-age girls, Sr. Bottani said. Trafficking is thus a form of violence against women, which is why it is important to involve women as leaders in the fight against it.

Sr. Rosita Milesi, Director of the Instituto de Migraciones y Derechos Humanos and ICMC focal person in Brazil, shared her concern for the situation of Venezuelans in her country. She testified that some 45,000 Venezuelans, many of them suffering from hunger, are concentrated in Brazil’s isolated and poverty-stricken Amazon region where living conditions are very precarious.

Even if the numbers are relatively low, “Brazil lacks migration policies and structures” to welcome migrants, Sr. Milesi said. With authorities being slow to respond, the Church is involved in advocacy and providing services.